Jay-Z told us that in his beautiful song GLORY dedicated to his daugther Blue Ivy, that she was made in Paris.
''But you was made in Paris and mama woke up the next day and shot her album package'' 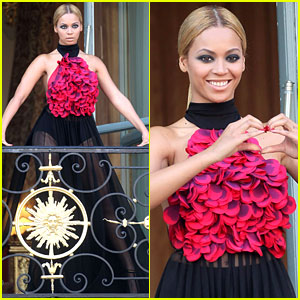 Beyonce on her balcony in Paris


Beyonce and Jay-Z have a special thing with the capital of France Paris.
According to Jay they made their Blue Ivy. Its a funny detail but it shows their love for Paris. They go every year to Paris. This year Beyonce is giving a big concert in Bercy Paris. 24 and 25 april she is singing her heart out for the French fans. I know that a lot of people from different countries as Germany, Belgium and Holland are going to Paris for the concert. Everyone KNOWS that Queen Bee loves Paris and that she is going to do that concert with sooo much love for Paris.

Today Beyonce announced on her official Facebook that Luke James is her opening act. FUNNY FACT: Luke James is dancing with Beyonce @ The Run the world clip. He must be one lucky guy to work with the worlds most talented woman of this moment and ever!
Beyonce & Luke @ the Grammy's 2013

IF YOU ARE GOING TO THE MRS. CARTER WORLDTOUR CONCERT IN PARIS YOU ARE SO LUCKY. ENJOY IT TO THE FULLEST. C'EST TRES MAGNIFIQUE AVEC LA BELLE BEYONCE ET LA BELLE STAD BERCY!